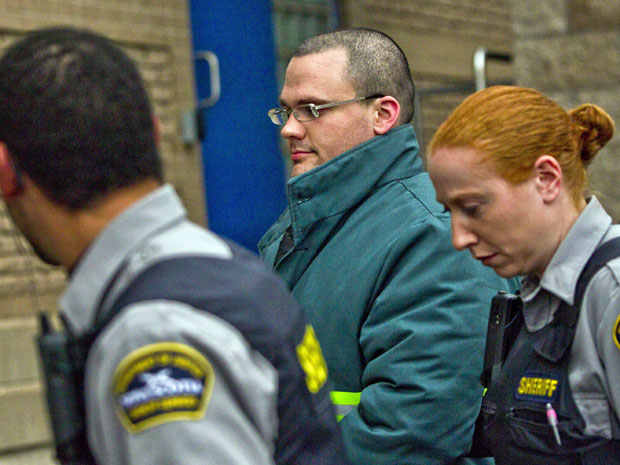 Christopher Falconer being escorted into court at Pictou, N.S.

Convicted killer Christopher Alexander Falconer, who was on parole when Amber Kirwan disappeared seven months ago, has been charged with kidnapping and first-degree murder of the 19-year-old, say police in New Glasgow, N.S.

Kirwan vanished last October after a night out with friends. Falconer, 29, was granted parole a year ago after serving time in prison for the second-degree murder of a cab driver in 1998.

“Amber’s murder was a shocking and senseless tragedy that impacted an entire community. It shattered many people’s sense of safety and security,” New Glasgow police Chief Delaney Chisholm said at a news conference Thursday morning.

“I hope today’s announcement of an arrest and charges will bring a sense of relief to the people of New Glasgow and the surrounding communities.”

RCMP Supt. Darryl Beaton said Falconer and Kirwan did not know each other before she disappeared. But he said that does not mean this was a random act.

Here are two posts I wrote back in October, 2011 when Amber went missing after leaving a pool hall in New Glasgow, Nova Scotia.

We Will Bring You Home Amber

7 Responses to Man charged with Murder of Amber Kirwan